Next time you're in your Jupyter notebook and you get an error somewhere deep in your stack, run %debug. It's a post-mortem debugger, and it'll drop you in an interpreter right where the error happened. You can inspect all the variables, go up and down the stack, and figure out what happened.

That should be enough to rock the world of some readers, but there's more! The problem with pdb is it's a very limited interpreter, lacking such luxuries as tab completion. What about if the bug requires something more powerful? Well my friend, do I have a snippet for you:

extract is the single most useful function I've written in five years of working in Python. It grabs the caller's environment, finds your interpreter session in the stack, and stuffs the caller's env into that session. Here it is working in isolation:

See? It's magic enough just by itself. But in combination with %debug, it's more magic.

The killer feature is when you've got some piece of numerical analysis that fails occasionally. Debugging things that fail occassionally is misery since if you knew what circumstances caused the bug, you'd probably already have fixed it. Post-mortem debugging is a lifesaver in this case, since it lets you wait for the circumstances that cause the bug to turn up naturally.

which generates the distribution of times at which a random walk becomes positive. Most of the time it runs fine, but occasionally it throws an IndexError!

What on earth? I call %debug and get the usual prompt

and type p xs to see if there's something obviously wrong. It doesn't look like anything to me:

Just a bunch of numbers. Hrm. Ok, in I type extract(), and quit the debugger. Back in my Jupyter session, xs has - magically! - appeared in my workspace, and a quick plt.plot(xs) 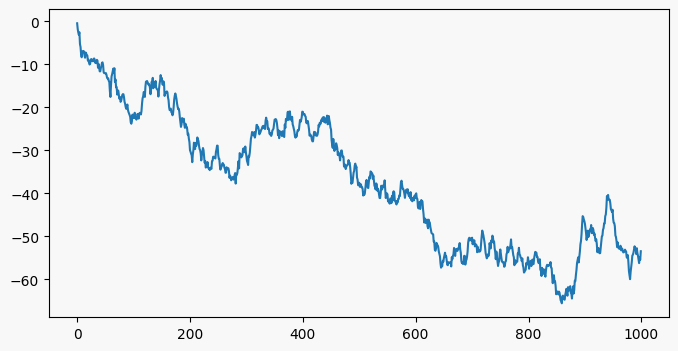 That's an artificial, facile, ridiculous example which - on purportedly less random data - happens to me three times a week. Once upon a time I'd have to commit actual thought to figuring out what scenario was leading to an out of bounds. With the help of pdb and extract, I can instead program thoughtlessly!